Matthew Bradford grew up as a Kentucky Wildcat fan in Winchester, Kentucky until High School then he moved to Dinwiddie, Virginia. On September 11, 2001, just a freshman in high school, he watched the terrorist attacks on America’s soil and knew at that moment he wanted to join the military after graduating. In September 2005 Matthew enlisted in the United States Marine Corps.

On January 18, 2007, he was severely injured after stepping on an Improvised Explosive Device in Haditha Iraq. This moment put Matthew on a detour and he would learn the true meaning of overcoming and adapting. He did not know the extent of his injuries until he woke up in Bethesda Naval Hospital three weeks later.

Matthew never lets his injuries define who he is or what he can do. Each obstacle is a new challenge. Over the years he has been inspired to share his story to motivate others through their own life challenges with his message of Just Walk. Even without Legs and Vision, you can still have No Problems. 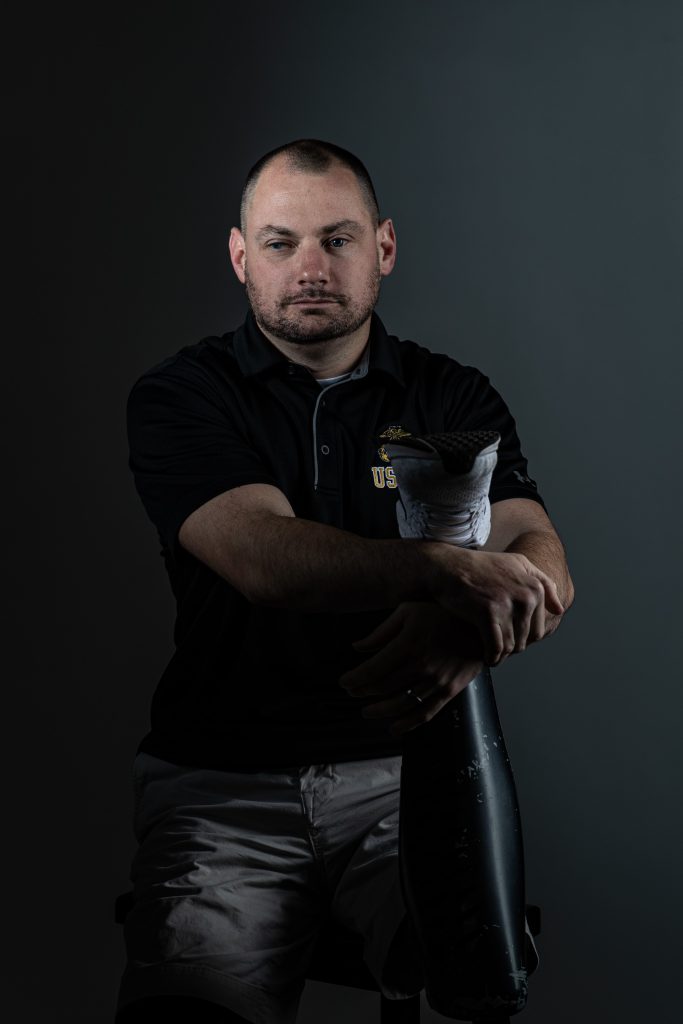 Matthew has never let his injuries define who he is or what he can do and lives his life pushing through any limitations that he comes across. He lives by the words “No Legs No Vision No Problem”, his hashtag. He was not supposed to live on January 18, 2007 but he did, and the Lord placed him on a new  mission and it was his lasting objective to pursue this assignment which is to live a life of inspiration, a life of motivation and leave an impression on every person he interacts with. He has completed multiple Spartans races even his Trifecta in 2017. He participates in marathons, half marathons, 50 miles down the coast of Florida and completed 10 miles of the Bataan Death March nine months after learning to walk on his prosthetic’s. He has surfed, skydived, and climbed 7,000 feet of Mt. Rainier, and enjoys hunting and fishing.  Corporal Bradford may have been knocked down that day in January, but one thing was never taken from him and that is his heart of a warrior! He did not let the enemy take his will to live, his fighting spirit or his resiliency to adapt and overcome his injuries.

Matthew has been recognized for his resilient attitude by the President of the United States, President Donald Trump, at the State of the Union Address 2018. He travels the country speaking to company employees and at Gala’s to donors of charities he supports as the keynote speaker. He also goes to high schools around Kentucky speaking on team work and what it means to be a brother’s keeper. Matthew works closely with a few non-profit organizations that focus on working with wounded service members that focus on building their moral beyond the injuries they sustained from combat and engages the competitive flame that continues to reside in each warrior. Currently Matthew works for Congressman Andy Barr as the National Security Fellow for the 6th District in Kentucky doing veterans outreach and assisting veterans with their needs. He believes in serving others as a way of giving back for those that served him while in recovery and not forgetting our Veterans who have sacrificed so much for our country.

Presidential State of the Union

Invited to State of the Union Address by President Donald Trump, 2018
January 2018

Re-enlisted in the Marine Corps

becoming the First Blind, Double Amputee in the History of the Marine Corps to do so. He assigned to Wounded Warrior Battalion East, Camp Lejeune, NC from July 2010-July 2012 and retired as a Corporal August 1, 2012.
April 2010

learned how to walk

On January 18, 2007, he was severely injured after stepping on an Improvised Explosive Device. His left leg was immediately removed from the blast, his right leg was severely damaged and would be surgically amputated later. Shrapnel instantly went into his eyes and he was blinded immediately and suffered multiple injuries to his arms, loss of movement in his right hand, and damage internally
January 2017

Went to Parris Island, SC for recruit training and then went to the School of Infantry of Camp Geiger, NC where he would be assigned to 2nd Battalion 3rd Marines Echo Company 2nd Platoon in Kaneohe Bay, Hawaii. In September 2006 the unit would be deployed to Haditha, Iraq.
September 2004